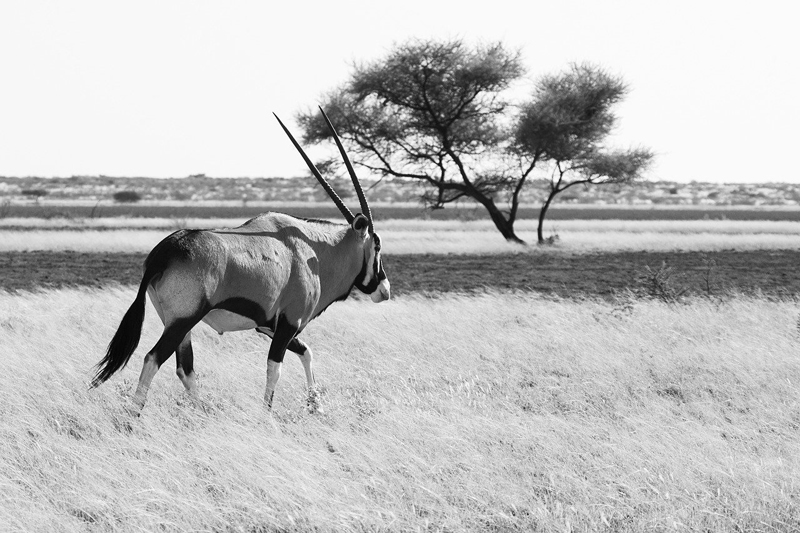 The Central Kalahari Game Reserve is one of the most remote reserves in southern Africa. Covering an area of 52 800 square kilometres, it takes the title of the second-largest reserve in the world. This area covers roughly 10% of Botswana’s land and dwarfs the Netherlands in size.

The remoteness of this reserve is what makes the Central Kalahari Game Reserve such an exceptional safari destination. Visitors can appreciate the reserve’s seemingly-limitless expanse and unique wildlife without crowds of tourists, making for an exclusive game-viewing holiday.

In this post, we’ll look at how to get to this Kalahari game reserve and get to grips with this area’s legendary animals. We’ll also look at its attention-grabbing features and how best to experience the game reserve.

Getting to the Kalahari Game Reserve 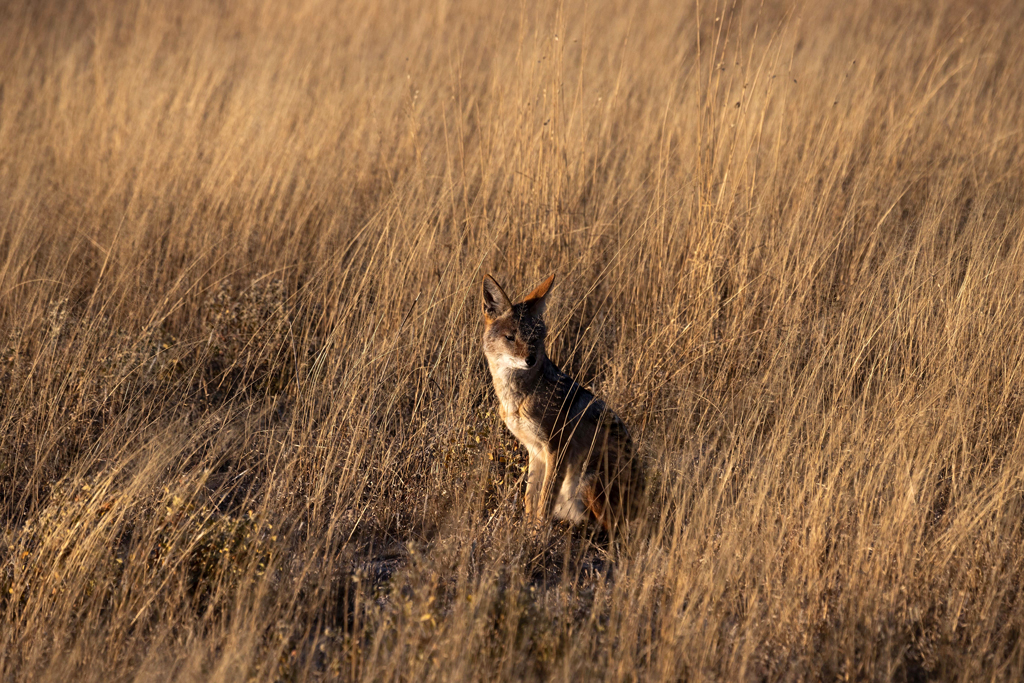 Photo by Luigi Liccardo on Unsplash

The game reserve covers a huge expanse in the Kalahari Desert in Botswana. To get to the park, many safari enthusiasts use the Matswere Gate. This gate is popular because it’s about 40 km north from the extraordinary geographical feature, Deception Valley – more on this later.

Matswere Gate is about 250 km from Maun, Botswana. You can fly into Maun airport and then rent a car (go for a 4×4) from there. Make sure you’re comfortable driving in rough conditions. And, keep in mind, that after rains, the roads can get tricky and you can expect longer driving times.

It’s much easier and less stressful to book a chartered plane and fly into one of the camps inside or around the reserve. You can then arrange game drives with your respective lodge and be shown around the reserve by an experienced and knowledgeable game ranger.

The Kalahari is known for having unique animals. Many of them have special adaptations that allow them to handle the harsh environment. Most animals in this reserve have adopted some interesting techniques in order to survive. You can understand why when you consider that the Kalahari Desert’s temperatures can reach up to 45℃ with very little shade or water available.

This has led to some curious animal “modifications”. And, of course, some of the Kalahari’s most legendary animals. Let’s take a look at a few examples below. 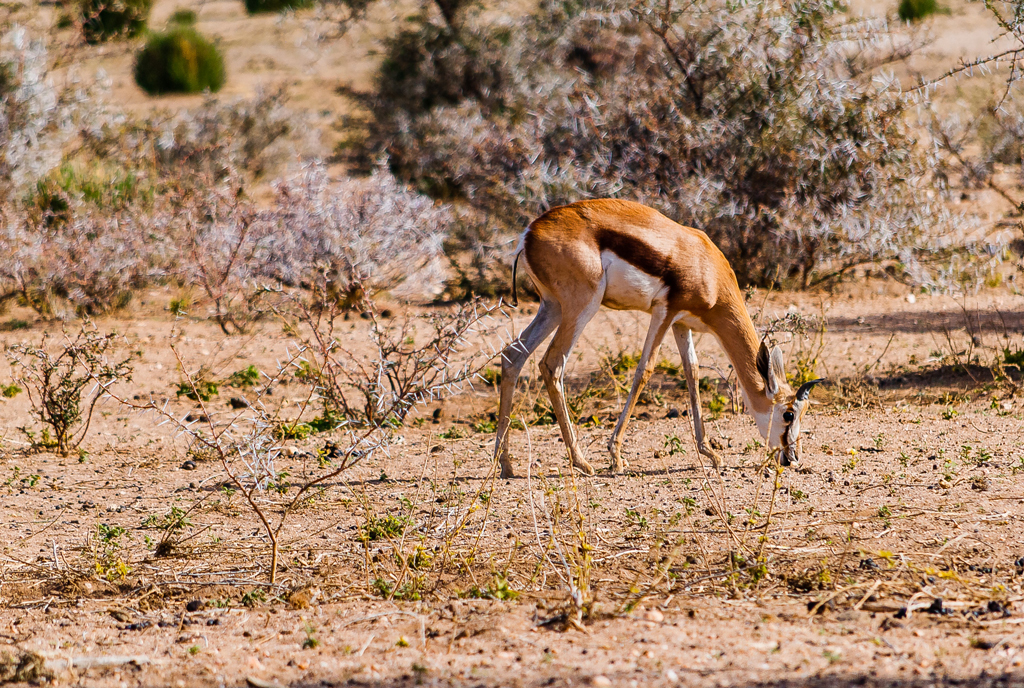 Some of the larger species of herbivore in the park, like the oryx and springbok, manage to satisfy their thirst by eating water-rich plants and leaves. Luckily, both creatures have special methods for preventing water loss on hot days.

The oryx relies on its nose to keep cool. Their nostrils have a system of blood vessels that helps to cool blood as they breathe in and out. This means that their bodies may heat up during the day, but their cooled blood keeps their systems regulated and at an optimum temperature.

Springboks turn their backs on the heat by literally doing just that. They turn their rear ends to the sun, showing the white areas on their rumps. Their white bottoms reflect the light, reducing the heat impact on their bodies. Nifty!
Predators have a similar mechanism of retrieving water to the aforementioned herbivores. They fulfil their water needs from the liquid within their prey. Some predators are also known to eat fruit as a means of quenching their thirst. 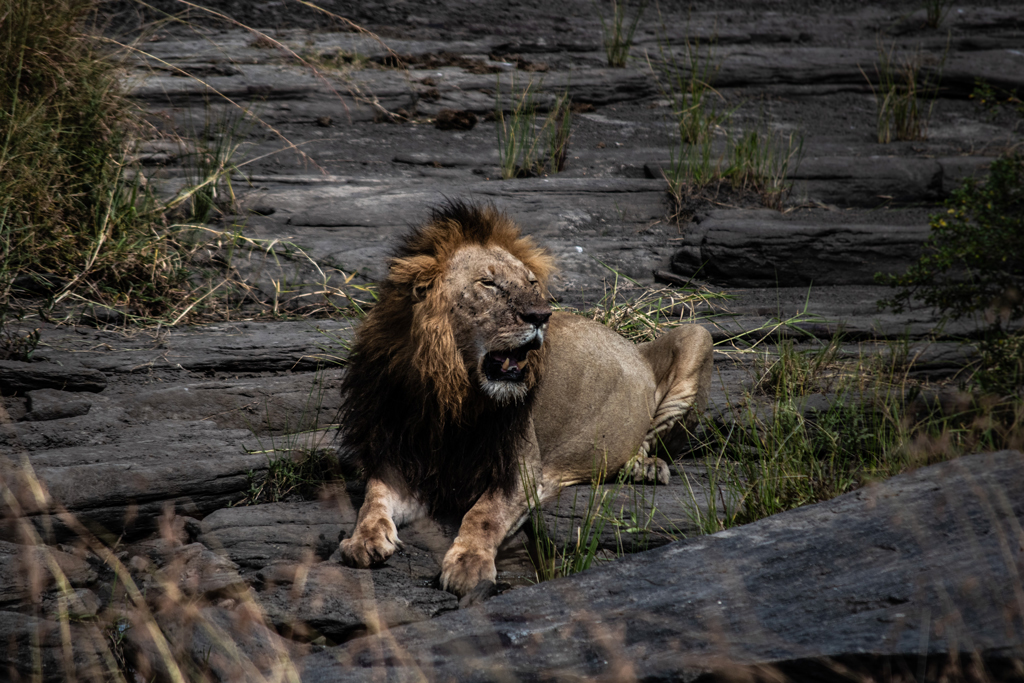 Photo by elCarito on Unsplash

Some of the Kalahari’s animals have achieved legendary status and have formidable reputations. The first is the Kalahari lion. The second one we’ll discuss is somewhat surprising…

Kalahari Lion
This desert-adapted lion is a subspecies of African lion that has undergone physical changes in order to survive the extreme conditions. Kalahari lions have longer limbs and leaner physiques with their trademark being a dark mane.

These hardy lions have more endurance than regular lions and have better resistance to thirst. They can go for two weeks without water. They bring down their temperatures by panting, which helps to cool their blood. 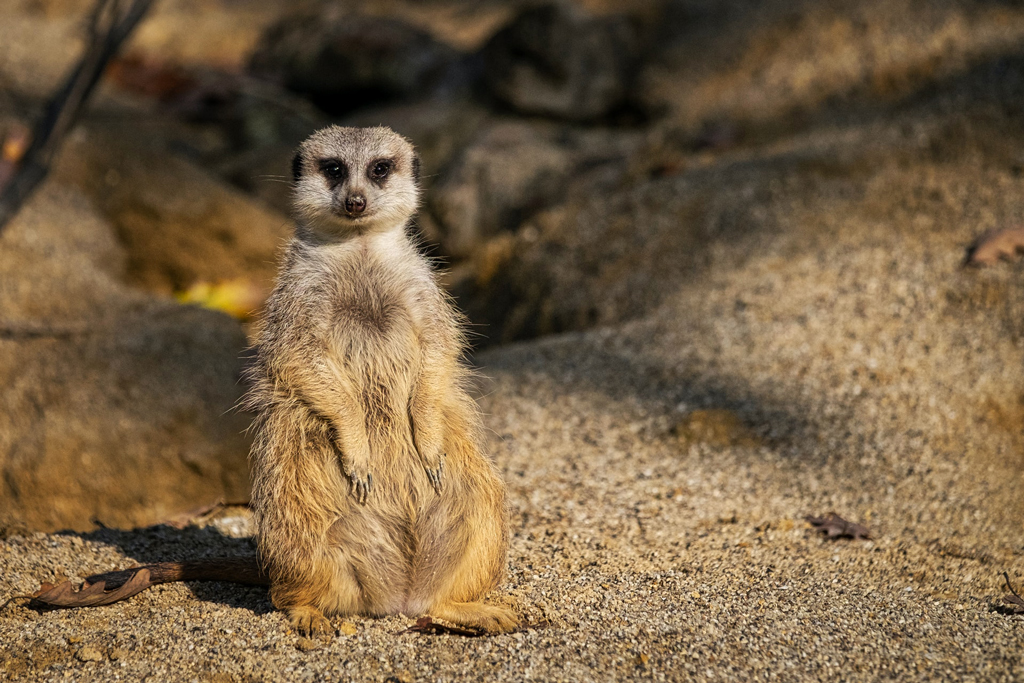 Photo by Marco Secchi on Unsplash

Another of the Kalahari’s legends is the meerkat. You won’t get far into the reserve without seeing some of these friendly animals popping their heads up to see what’s happening.

These creatures have become iconic because of their personalities and their ability to survive in the Kalahari environment.

Meerkats have dark patches of fur around both eyes, which makes them look like mini superheroes. These patches reduce the glare of the sun, meaning they can keep a lookout for predators without being blinded. They also live in burrow systems that keep them out of the heat and give them an easy escape route from predators. 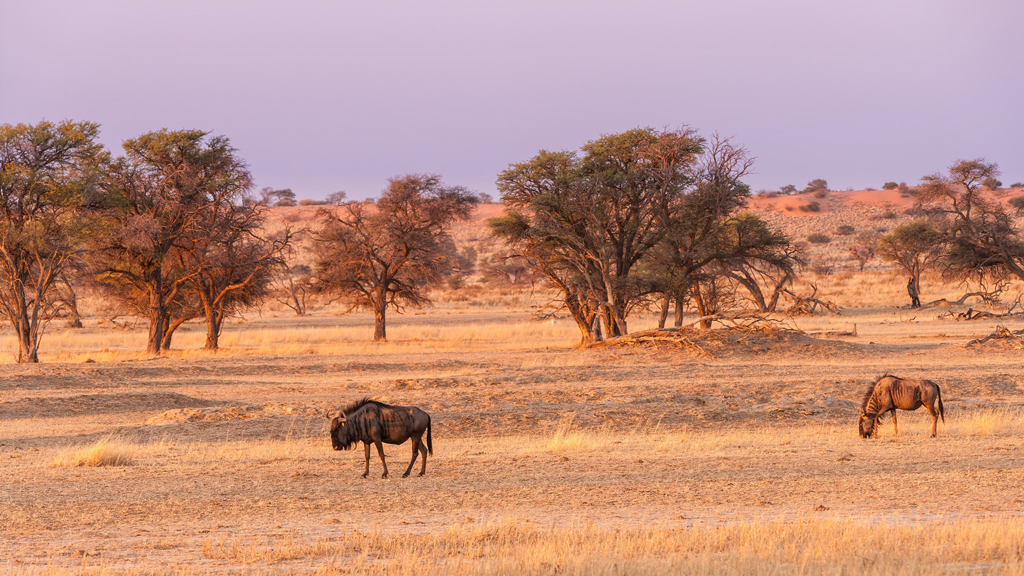 Photo by Chris Stenger on Unsplash

Aside from its legendary animals, the Kalahari also has some fascinating geographical features. We’ll take a quick look at three of them.

Deception Valley
Deception Valley is considered to be a “waterless oasis”. It was named after a mysterious riverbed, which creates the illusion of having water. This interesting illusion is now a gathering spot for springbok, gemsbok, and avid game viewers.

Piper’s Pan
Pipers pan is a series of pans that rise from Deception Valley. It is an absolutely stunning destination as it is a fusion of multiple pans and soils that present as an extraordinary pattern of ecosystems.

Passarge Valley
The Passarge Valley is a fossil river bed. Its clay bottom facilitates the support of a large number of animals – more so than the dune-veld of the area. This is because the clay floor is a source of nutritious grazing for Kalahari game. Visitors to this valley will appreciate the extensive open spaces dotted with Acacia trees.

San People
The San are some of the oldest inhabitants of Southern Africa. They are a diverse group of indigenous hunter-gatherers, spread over several territories including Botswana, Angola, Lesotho, Namibia, Zambia, and Zimbabwe. Botswana has the highest San population with over 60 000 San people.

The Central Kalahari Game Reserve was initially established as a homeland for the San. In recent times, many of these people have become members of local tribes and live in settlements in the south of the reserve.

For a home-grown take on the area, you can book a tour with a San guide. There is no better way to see the Kalahari than with a person whose culture is firmly rooted in the land. 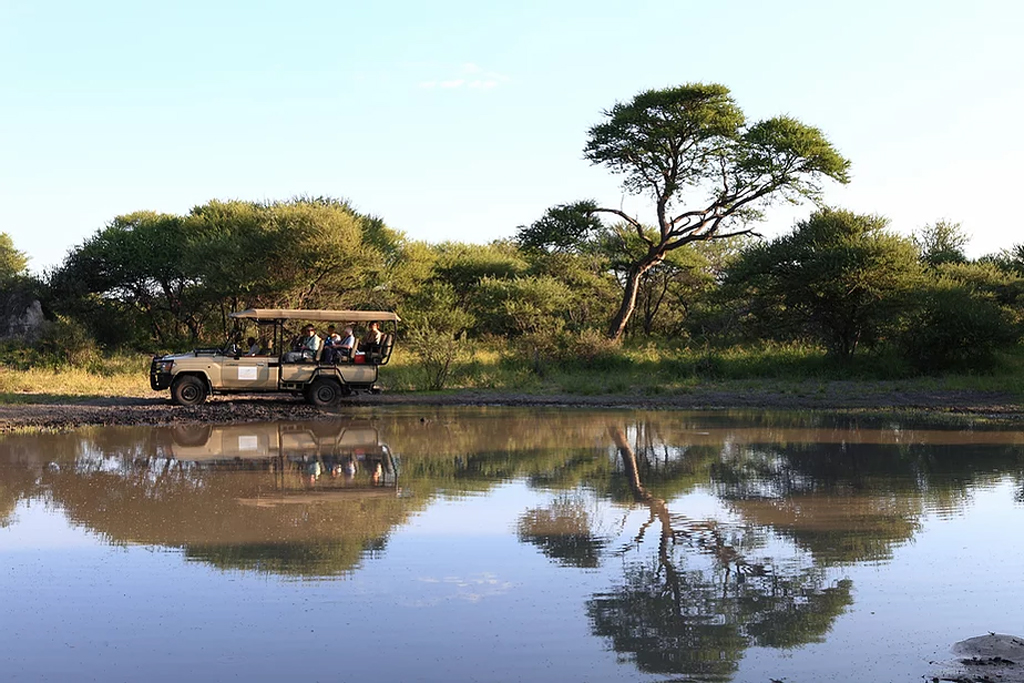 Book a true Botswana safari experience by staying at a lodge within or nearby the Kalahari Game Reserve. Here are two options below.

Haina Kalahari Lodge is located on the northern border of the reserve and offers three categories of uniquely-African tented accommodations. All with a relaxed and informal atmosphere.

Deception Valley Lodge, located by the northern region of the reserve, offers the opportunity for guests to explore the Botswana environment with a Bushman guide of the Naru-speaking San tribe. An unforgettable cultural experience!