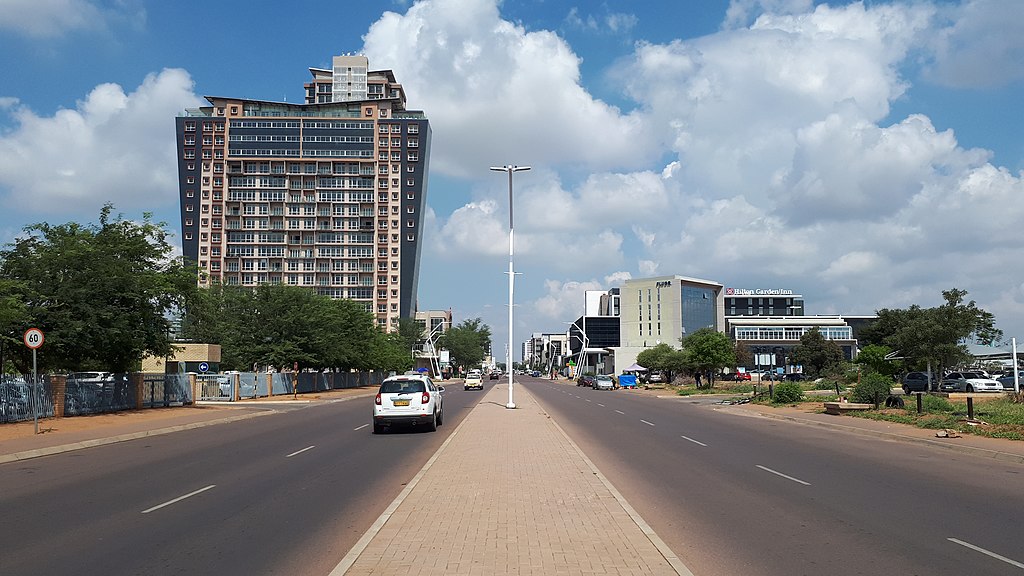 The beauty of Southern Africa shines through from the friendly faces of its dynamic people, the intricacies of its culture and cuisines, and the engrossing history that makes the region what it is. Yet, even in an area filled with natural splendour, beguiling Botswana stands out from other African countries.

Right at the centre of this larger-than-life country is Botswana’s capital, Gaborone. A city made up of modern urban hubs, exciting entertainment venues, and a thriving nightlife scene. But, the real showstoppers are the immaculate landscapes and astonishing range of wildlife. It’s no wonder this city is an oasis for tourists.

Come and join us as we admire this masterpiece. Take a trip with us to Gaborone, Botswana, and discover the magic of the African continent.

Behind the Name: Chief Gaborone

Situated between Kgale Hill and Oodi Hill, near the confluence of the Notwane River and Segoditshane River, you’ll find Gaberone. Formally known as Gaberones, this city did not become the capital of Botswana until 1965.

The seat of power was transferred from Mafeking (now Mafikeng), South Africa. This happened one year before Botswana officially gained its independence from Britain in 1966.

This beautiful city is named after the former Chief (Kgosi) Gaborone of the Tlokwa tribe. He was a great leader who was known for his generosity.

During his reign, he managed to erase ill-will between the Tlokwa people and neighbouring tribes by sending gifts of money and cattle. Kgosi Gaborone was also accredited for the rescue of the Kgatla chief, Lentswe, who had been abandoned by his fleeing tribesmen during battle.

The Formation of Botswana’s Capital

Gaborone’s formation was not a straightforward process. It began with promise – claiming a spot as one of the fastest-growing cities in the world. However, it blazed too bright too quickly.

The city’s accelerated population growth led to insufficient housing. The infrastructure could not keep up. This eventually resulted in people forming illegal settlements to secure shelter.

Gaborone also had to deal with a spillover of trouble from neighbouring countries South Africa and Zimbabwe. During the 1960s, many South Africans fled to Botswana seeking refuge from the Apartheid government. Their presence in the country only helped to encourage Tswana nationalism and the growing demand for independence.

Despite the initial growing pains, Gaborone now serves as both the economic and political capital of Botswana. The city is host to a variety of diverse people who speak many languages. These languages include Setswana (the dominant language of the Botswana people), English, Kalanga, and Kgalagadi. 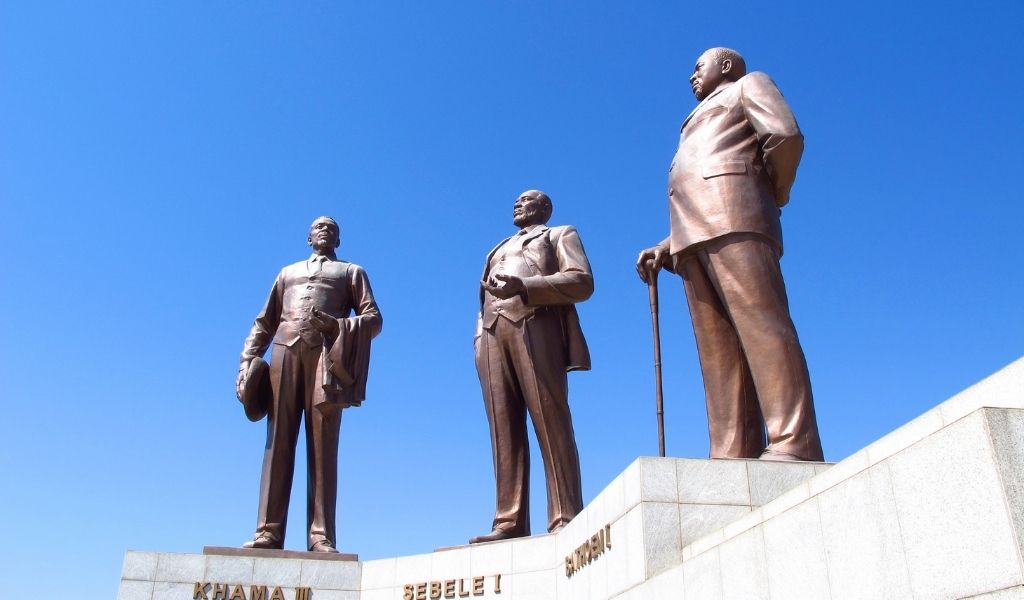 In 1885, three tribal chiefs (Dikgosi), Sebele I, Bathoen I, and Khama III, courageously travelled to England to plead with the Queen. At the time, the country was in danger of being assimilated into the exploitative British South African Company.

As a result of their trip, the leaders managed to get the nation put under the control of the crown. The effort of these brave men would later keep the country from being affected by the atrocities of South African Apartheid.

Today, you can bear witness to the spectacular monument that stands in honour of these great men. Situated in Gaborone’s city centre, you’ll find the trio of dapper, bronze giants.

These admirable statues were built in celebration of the influential trip to Britain that led to Botswana’s independence. A walk around Gaborone’s centre will give you the chance to see this great tribute to the Dikgosi and Botswana’s cherished history.

Things To Do In Gaborone, Botswana 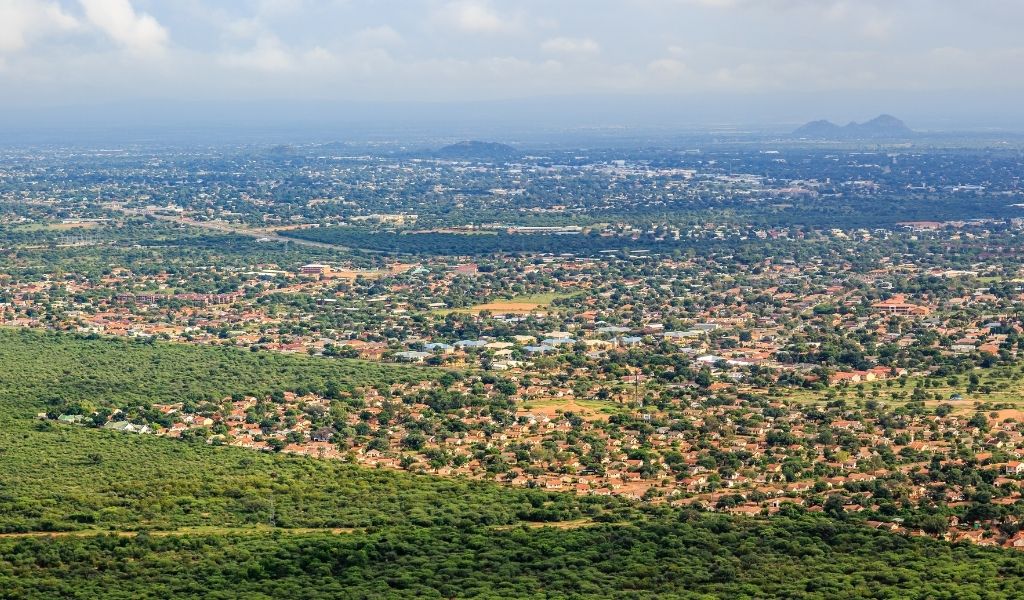 Whether you are exploring the city’s numerous shopping malls, touring the national museum, or taking in some of the amazing wildlife, Gaborone has something for everyone.

You won’t have enough time on your trip to explore everything the fascinating capital has to offer. From the moment you arrive at the international airport, you will be blown away by the hustle and bustle of metropolitan Botswana city life

Gaborone is a place brightened by the contrast of overly modern hotels and unique local independent shops. Here are just a few ideas of what you can look forward to when exploring this extraordinary African city. 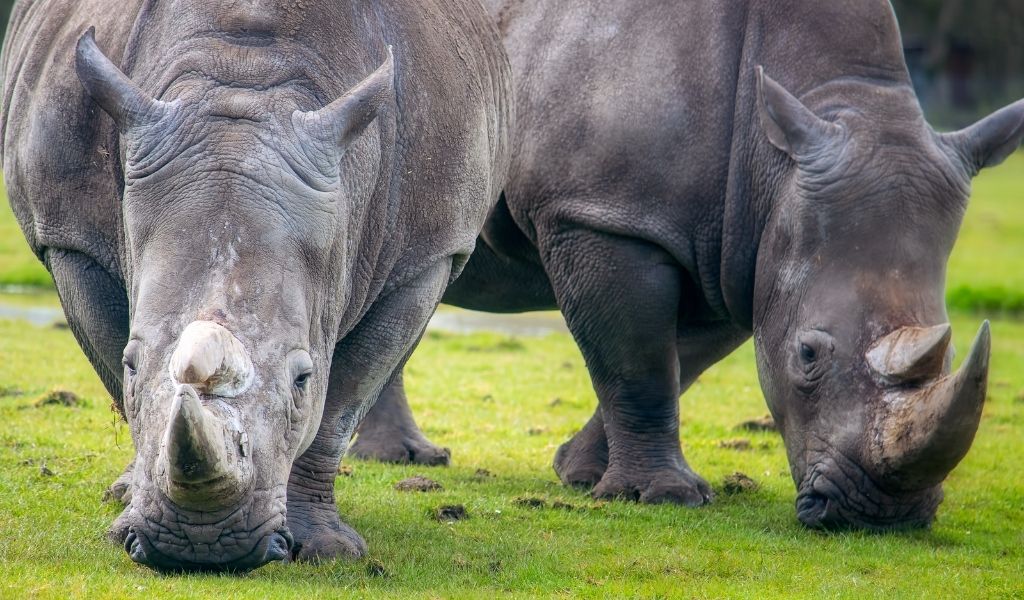 It’s no secret that some of the planet’s most exciting wildlife species can be found in the South of Africa, and Gaborone does not disappoint. This area is home to a collection of the most abundant and diverse game reserves on earth.

The Mokolodi Nature Reserve is a prime example. This treasure sits just a 6.2 mile (10 km) drive from Gaborone city centre.

Founded in 1994, the game reserve is situated on 12 mi2 (30 km2) of donated land. It is a pleasure to visit and is sure to quench any safari-goer’s thirst for the wild.

The variety of animals is endless. It’s a great privilege to roam the land and be surrounded by beauties and curiosities like giraffe, zebra, mountain reedbuck, hartebeest, gemsbok, kudu, impala, waterbuck, and brown hyena.

One of the greatest things about the park is its tremendous effort to preserve endangered wildlife for future generations. In this spirit, Mokolodi Nature Reserve has an enclosure that houses a captivating collection of cheetahs. Guests can also look forward to a reptile park that showcases and protects various species of snakes.

The reserve hosts a crash of Southern White Rhinos as part of a national breeding programme. The programme aims to rebuild the Rhino numbers in Botswana. This is a great help for a species that has been steadily dwindling as a devastating result of illegal poaching.

The confinement of these beautiful creatures is a way to ensure their safety. It also reinforces responsible tourism as visitors can see wildlife through conservation-friendly activities like Rhino and giraffe tracking. 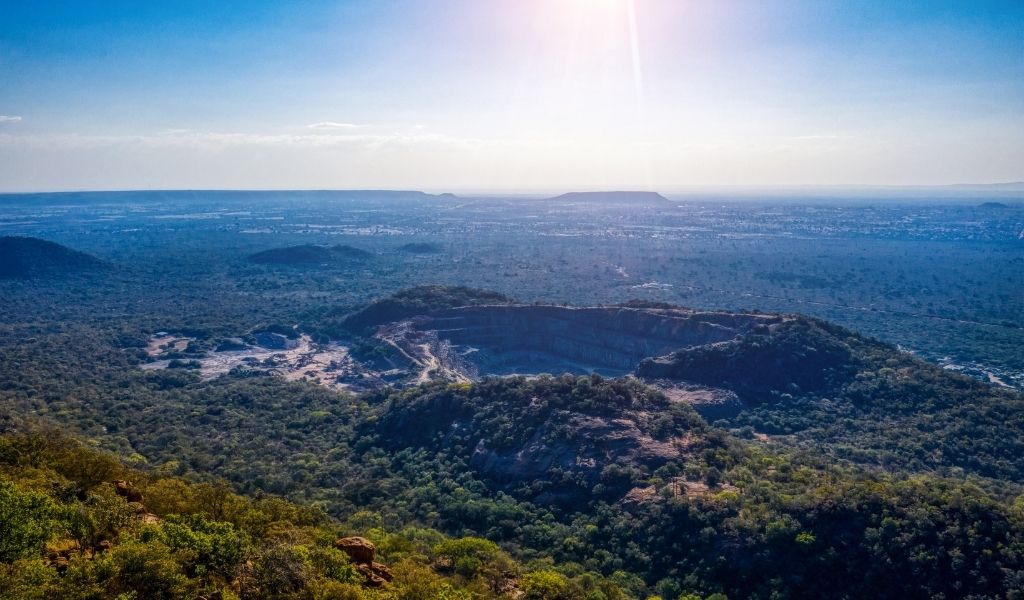 If you are an exercise buff with good stamina then a hike to the top of Kgale Hill is the perfect way for you to let off some steam. It may not be the easiest climb, but the sights and surroundings make this adventure well worth the effort.

Nicknamed The Sleeping Giant, Kgale Hill reaches an altitude of 4 222 ft (1 287 metres) above sea level. You have the choice of three hiking trails – each one more splendid than the next. Keep an eye out though. You are almost guaranteed to come across troops of baboons on this exciting journey.

Movie fans will enjoy this fun trivia fact. The filming for the popular African HBO series, The No. 1 Ladies Detective Agency took place at the foot of the hill. This gave rise to the nickname “Kgalewood” (pronounced like a guttural “Hollywood”) for the set!

The producers of the show signed a ten-year lease for the area. This prompted the Botswana government to invest $5 million in the show to develop the area for tourism. 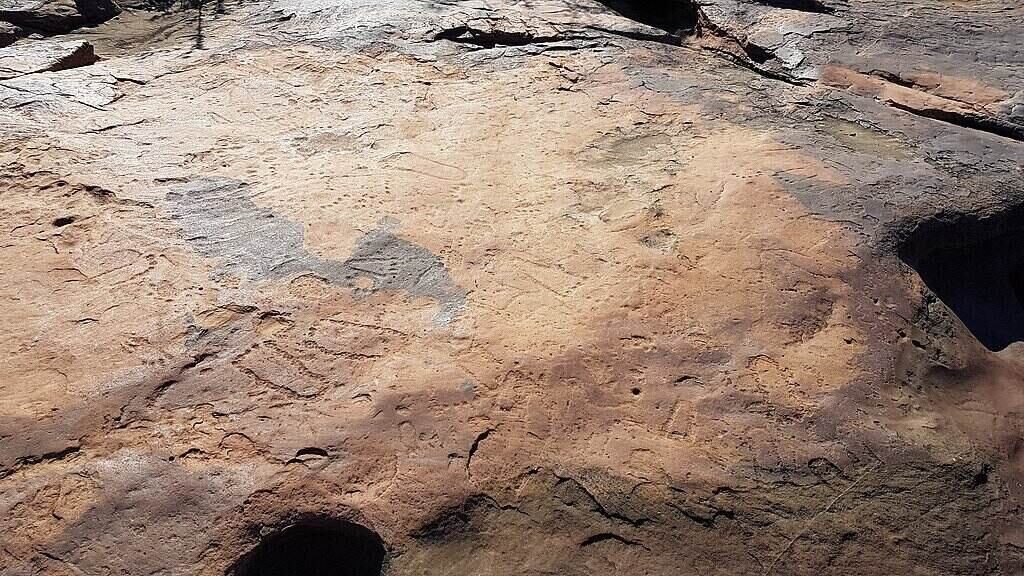 The Matsieng footprints are a collection of prehistoric rock carvings. These impressions and engravings are a cornerstone of Botswana’s cultural tradition. The footprints are located on a flat surface with several large holes that act as natural basins and collect rainwater.

The convenient location means that humans have been visiting this place for centuries to quench the thirst of their livestock and fill their waterskins. During this time, a group of roughly 170 carvings depicting human and animal feet have been traced into the rock.

The carvings’ presence fanned the flames of the great Botswana myth of Matsieng the hunter. Legend has it that Matsieng, a one-legged giant, emerged from a waterhole followed by his animals and then his people. Many locals credit him for the creation of mankind. 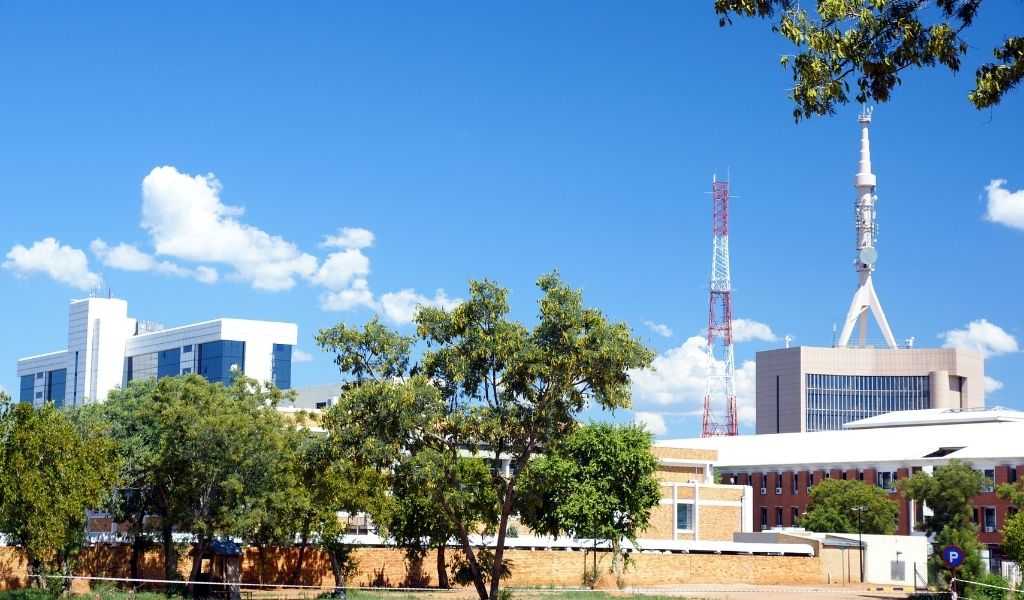 Whether you are looking for a short getaway, a change of pace during your safari vacation, or a great cityscape sundowner location, the capital is a must-visit.

What better place to start your Southern African adventure than the country’s largest city? In Botswana, you can experience everything from the legendary Okavango Delta to the great escape of the Chobe National Park.

Spread your wings and start planning your trip to the wilds of Africa!