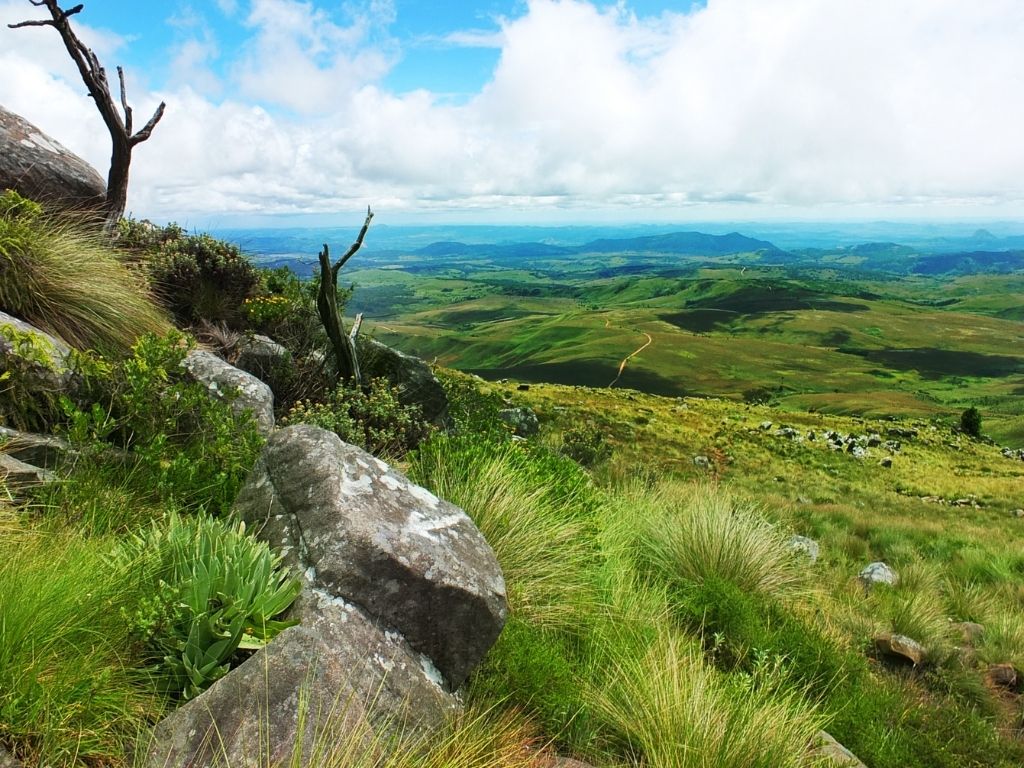 Zimbabwe has many things to offer but Nyanga is one of this great nation’s lushest highlights. As one of the first national parks declared in the country, visitors are treated to a decadent sample of history. Take a trip and discover one of Zimbabwe’s greatest prides: Nyanga National Park.

Splendour of the Nyanga Mountains 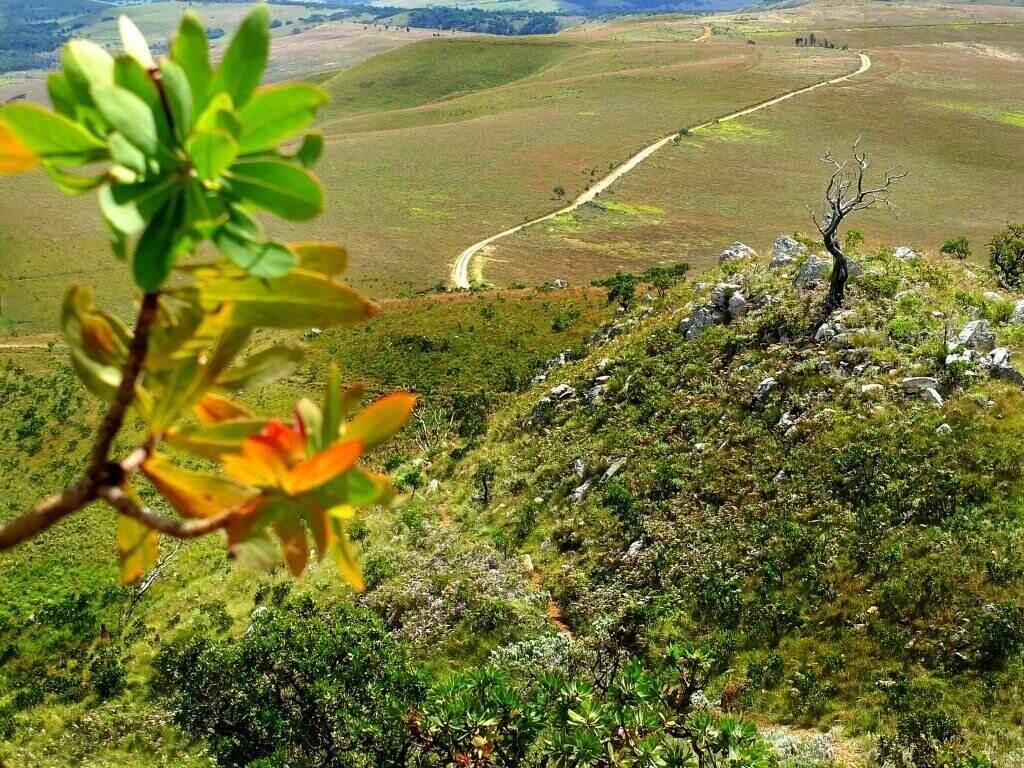 What can you expect to see when you go for a vacation at Nyanga National Park? Prepare yourself for an overwhelming “nature experience”. You’ll see a diverse, sunkissed highland that’s peppered with bright bursts of colour, extraordinary wildlife, and astonishing peaks.

Not to mention that you will actually be at the “top” of Zimbabwe. One of the peaks, Mount Nyangani, is the highest point in the country!

Numerous streams and rivers wind through the park. The central and eastern regions come together to form part of the Zambezi Basin.

In addition, the Mare River, the Nyamuziwa, and the Gairezi River flow northwards out of the park. They all ultimately merge to join the Mazowe River.

These rivers have led to the formation of several dams. These have been constructed for recreational purposes (more on this later) and tourist water supply.

Stunning collections of granite underlie most of Nyanga National Park. The peaks of the mountains are formed from Umkondo Group dolerite and sandstone.

These clusters of stone form the cliffs and ridges of the hills. At the junctures where the granite meets the dolerite, the waterfall formations are forged. The different types of rocks make the Nyanga National Park visually stunning. 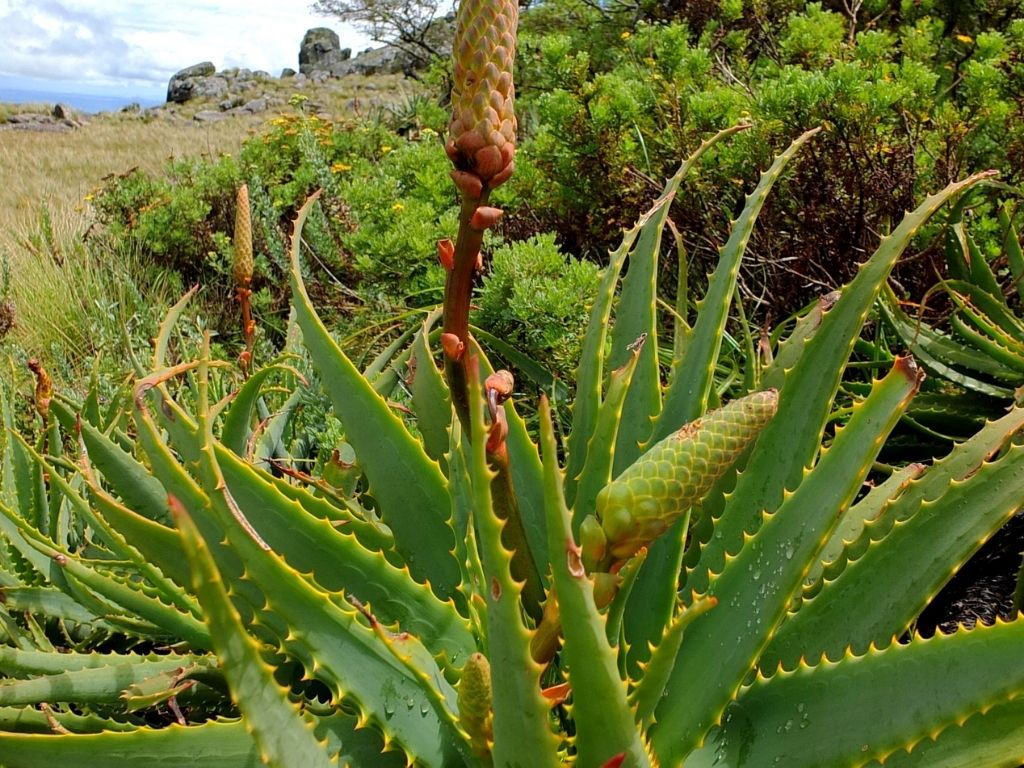 The historical roots of Nyanga National Park run deep. The Ziwa people lived here from the fifteenth to the seventeenth century.

Ruins of their civilization are scattered throughout the park. The ruins are some of the greatest in the country, rivalling even those found at the Great Zimbabwe National Monument.

Evidence of ancient homestead ruins has been unearthed here. In the middle of the homesteads are pit structures. These were formerly used as cattle-pens and larger hill-top settlements.

Interestingly, some of the core areas of the park were once used as Cecil Rhodes‘ old homestead. He acquired the land to grow apples and raise sheep. This region now forms the base for the Rhodes Museum and Rhodes Nyanga Hotel. 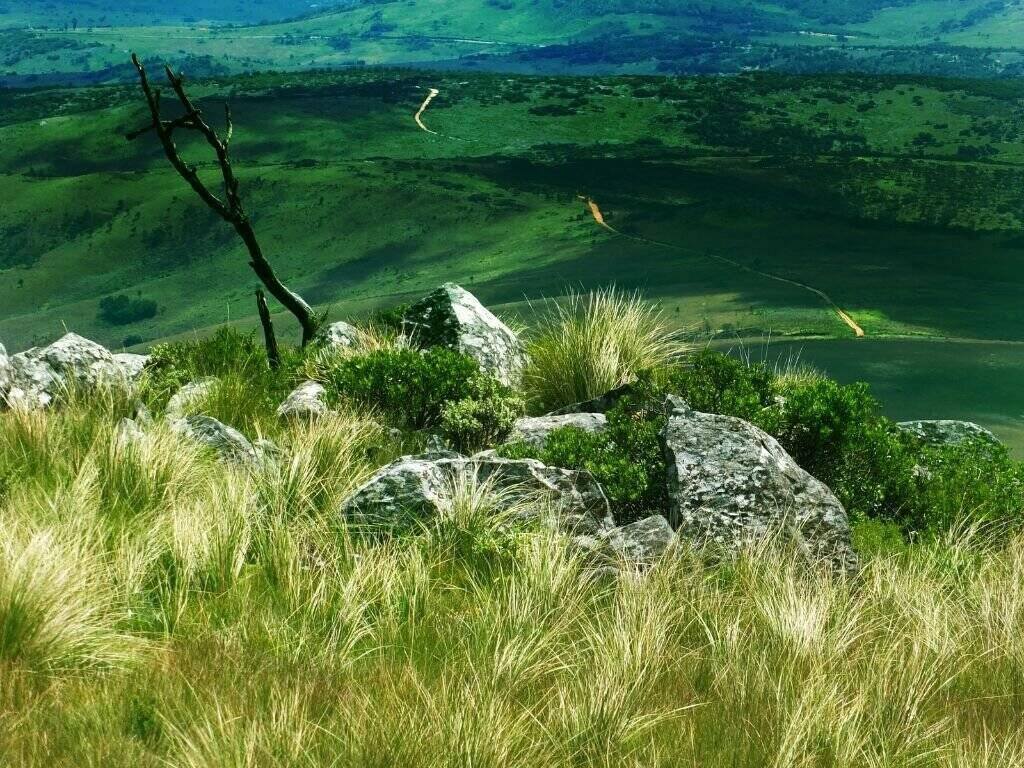 A trip to Nyanga National Park is more than just a relaxing vacation. The activities are endless. There is something for everybody to do.

You have the opportunity to make it a true family experience with a wild twist. Every type of traveller will have a fun-filled trip here, including avid birders, serious safari fans, dedicated hikers, and water-loving fishermen! 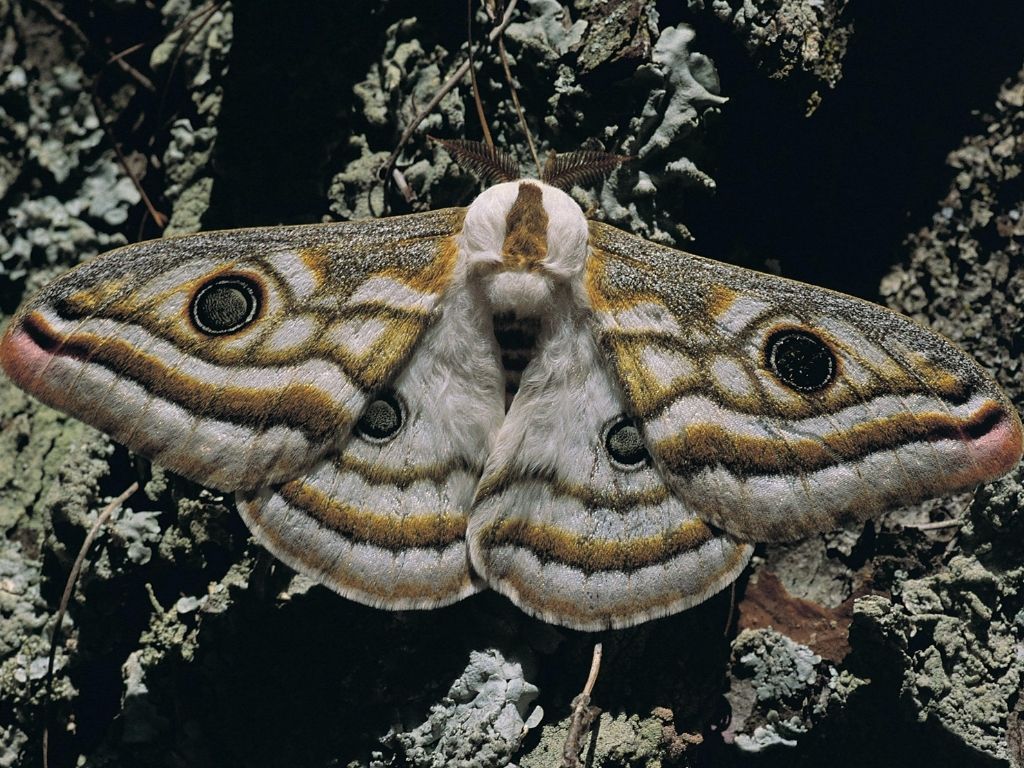 Nyanga National Park is not primarily a game park. But, try telling that to the abundant variety of wildlife that roams through the reserve. Beautiful creatures of all shapes and sizes can be found concentrated in the central and western areas of the park.

The wildlife checklist at the park is remarkable. Guests report sightings of big buffalo, grazers, and even fierce lions.

Visitors are also likely to see kudu, reedbuck, klipspringer, and several other species of antelope. But, make sure you tread carefully.

Alongside lions, other dangerous predators roam these wildlands. Leopard and hyena have been spotted in the shadowy brush too.

In a bid to aid conservation efforts, the park also houses some endangered species. The Inyangani River Frog is an endangered amphibian that you might be lucky to see among the rocky fast-flowing streams.

While searching for endangered frogs, make sure you take a deeper look at the river too. The area’s rivers and dams are teeming with rainbow trout!

Of course, some people want to do more than observe the fish. Fly fishing is a major activity in Zimbabwe’s eastern highlands. With plenty of rivers to choose from, you get the chance to kick back and enjoy a drink while you wait for the fish to come biting.

The park entrance fee includes a fishing license. This is valid for most of the waters in the area. Just be careful not to fish in Lake Gulliver and Purdon Dam. Separate licenses are needed for these particular waters and are only available at certain times of the year. 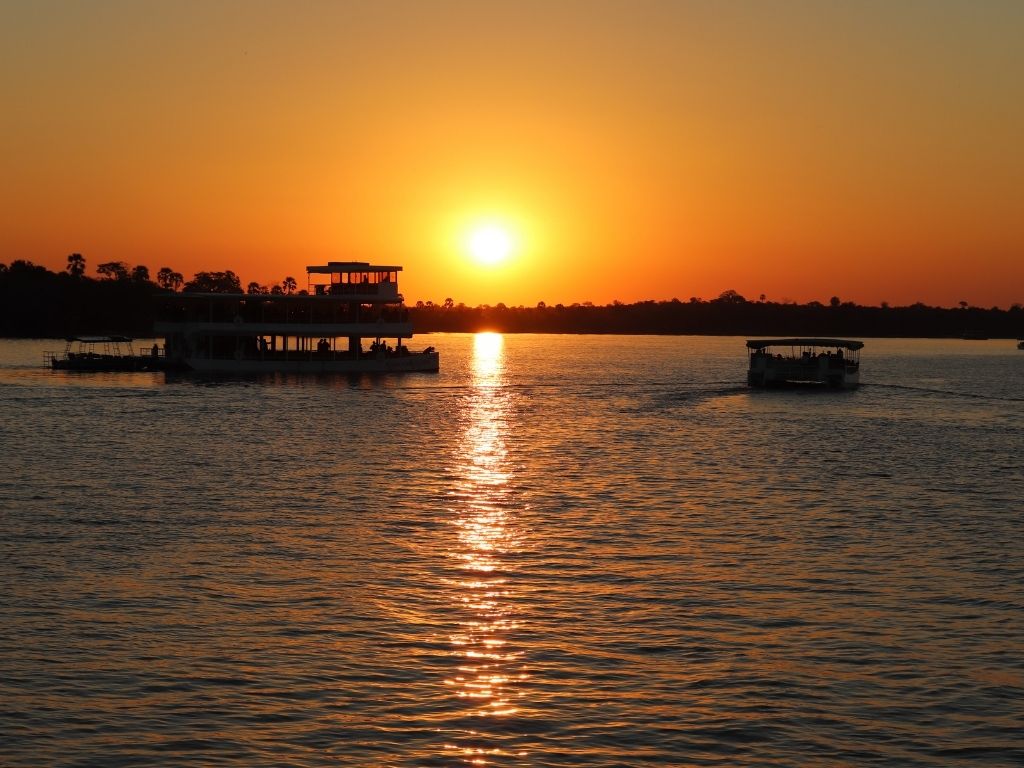 Even if fishing isn’t your thing, you will still want to see these magnificent rivers up close. Close to the headquarters of the park is Nyangombe River.

The river’s flow cascades over rocks and forms a natural swimming pool. The pool is adjacent to a sandy area known locally as Brighton Beach.

If you are not looking to get your hair wet, why not hire a boat and dip your toes in the water instead? There are boats available at the Rhodes, Mare, and Udu dams.

Picture this… Sitting on a boat deck, you get to watch the sunset as it fades behind the devastatingly beautiful mountains… Softly flowing water rushes beneath your feet. Talk about a scene to remember!

You probably won’t want to visit the Nyanga National Park for just one day. There is just too much to see.

Luckily, the area is filled with camping grounds. Three rest camps are available and fully equipped with self-catering lodges. There is a convenient caravan park on the Mare River just west of Rhodes Dam. And, there are also two lodges lining each side of the Pungwe River.

If you want to incorporate luxury and history into your stay, there are two private facilities within the park where you will be treated like royalty. One of them is the famous Rhodes Hotel, which is located on the south bank of the Rhodes Dam. 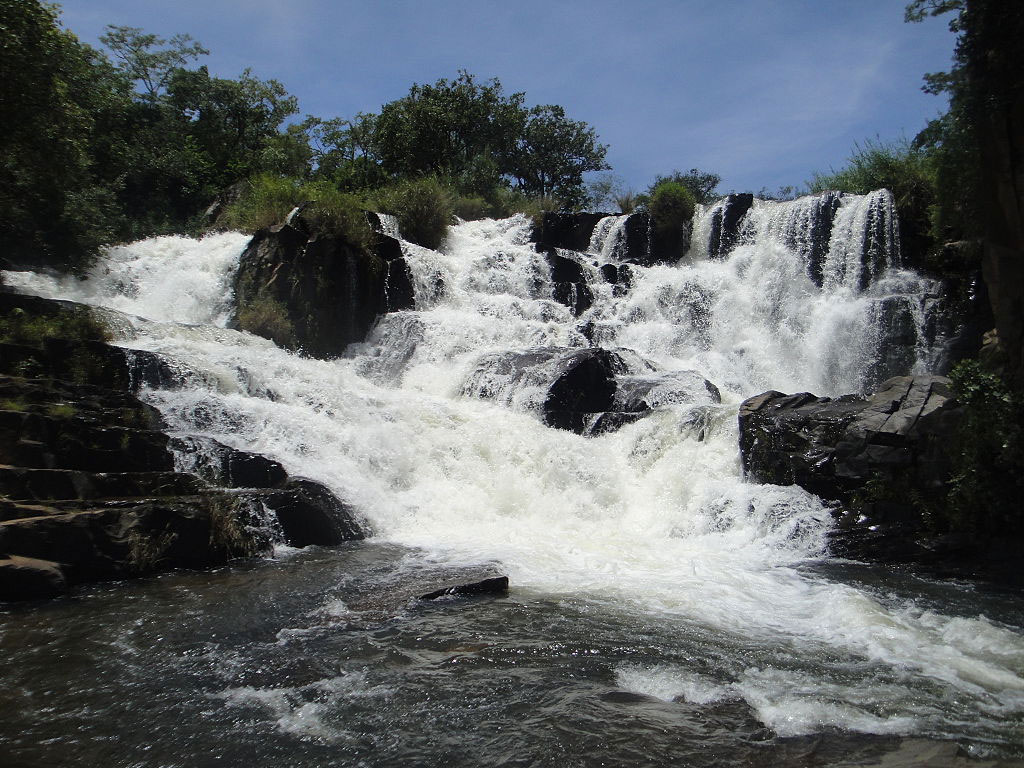 Zesty Zimbabwe provides another magical African destination for the eager traveller. The rolling green hills of Nyanga National Park are a captivating scene to behold.

Embrace a huge variety of exciting activities – all while breathing in the fresh mountain air. Change your worldview…Come and visit Nyanga National Park.