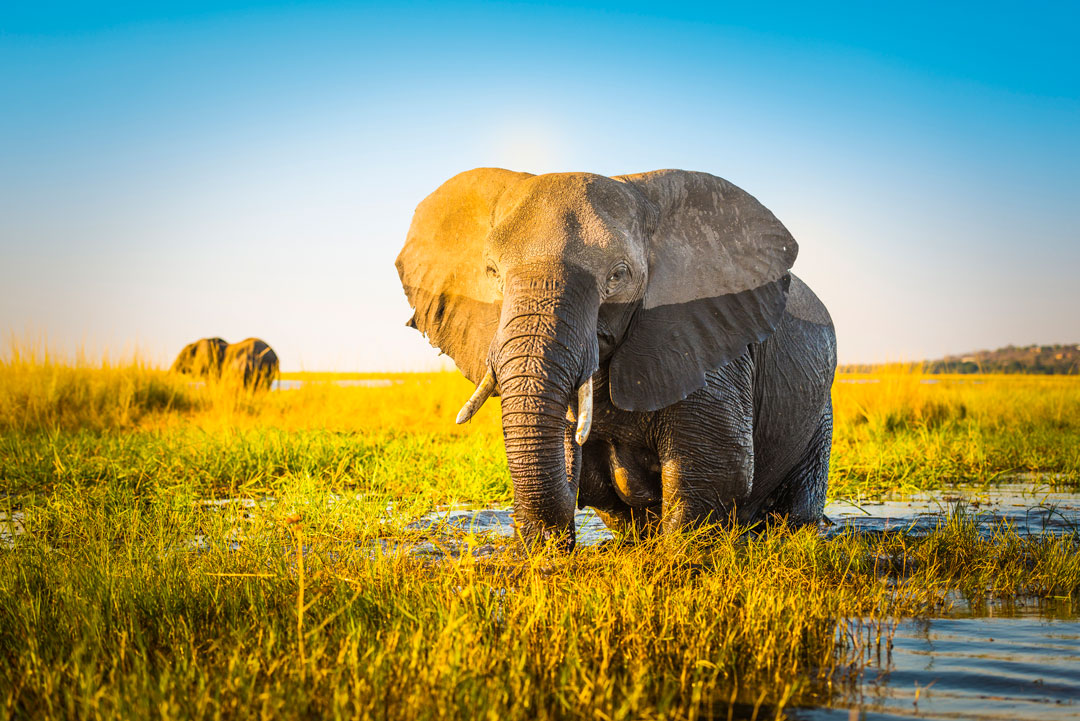 We’ve all got a list of places that we want to see for ourselves: places friends have enthused about, places we’ve read about, dreamed about. This is our list. It’s the 500 most thrilling, memorable, downright interesting places on this planet ranked in order of their brilliance. COVID-19 has resulted in travel restrictions that may have clipped your wings through 2020, but now is the perfect time to plan ahead so you’re ready for your next adventure when it’s safe to hit the road again. These are the places we think you should experience; there are sights that will humble you, amaze you and surprise you. They’ll provoke thoughts, emotions or just an urgent need to tell someone about them.

Here are the top 10 travel experiences from Lonely Planet’s Ultimate Travel List. We hope this will inspire many more travel wish lists of your own. 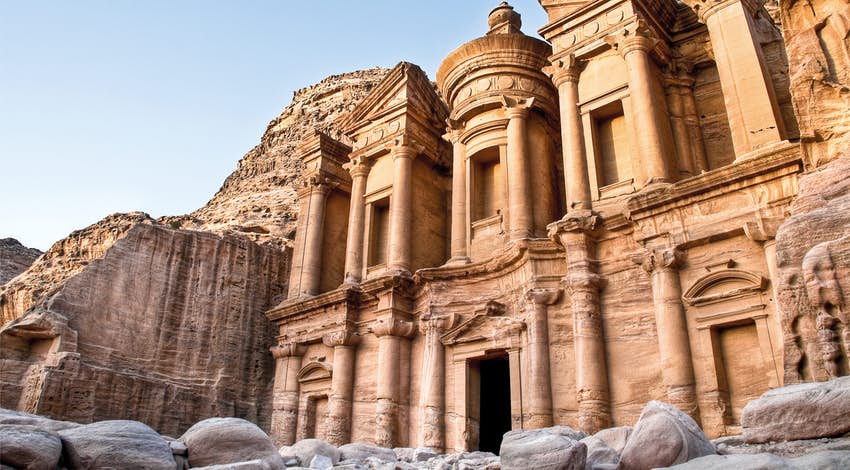 The treasured Unesco Heritage Site of Petra is the must-see ultimate experience on our list. Once nearly lost to the outside world, the sandstone city is now one of the most loved places on the planet, voted in as one of the New Seven Wonders of the World by popular ballot in 2007. Spread over some 102 sq miles (264 sq km), Petra was constructed by the ancient Nabataeans, a civilisation of crafters and merchants, and made for a grand trade route stop-off between Arabian oases. But generations later, after the city was abandoned, it was known only to the Bedouin who made the caves their home. The iconic Treasury, looming 128ft (39m) high is most visitors’ first sight of the city, reached after a winding journey through a narrow water-etched slot canyon. Rediscover the city’s eternal air of mystery in the early morning or the hours before closing when it’s at its most atmospheric.

2. See the islands that changed the course of science – the Galápagos 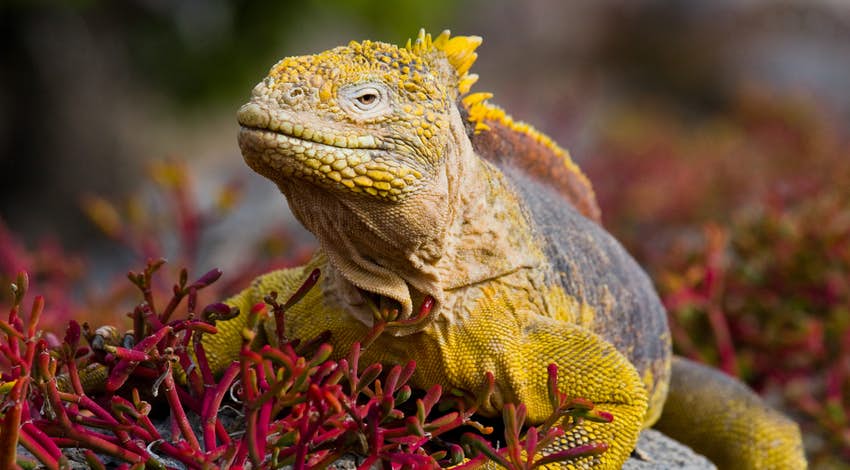 A thousand kilometres from mainland South America, life on the Galápagos follows different rules. Cormorants can’t fly. Iguanas can swim. Tortoises live nearly 200 years. The islands are famed, of course, as the place where Charles Darwin developed his ideas on evolution by natural selection. The process is more obvious here than elsewhere on Earth, since animals that otherwise look alike diverge subtly from island to island, depending on their environment. You’ll find blue-footed boobies performing cartoonish mating dances, creeping colonies of iguanas, penguins zooming underwater, and fur seals lounging on volcanic rocks. Even 200 years after Darwin’s journey on the HMS Beagle, visitors continue to be astonished by the archipelago’s stunning diversity. Ecotourism is central to everything on the 17 islands of the Galápagos National Park – the airport is made from mostly recycled materials and runs on wind and solar power, and each municipality has a strict sustainability plan.

3. Take some life lessons from the Aṉangu at Uluru-Kata Tjuta National Park 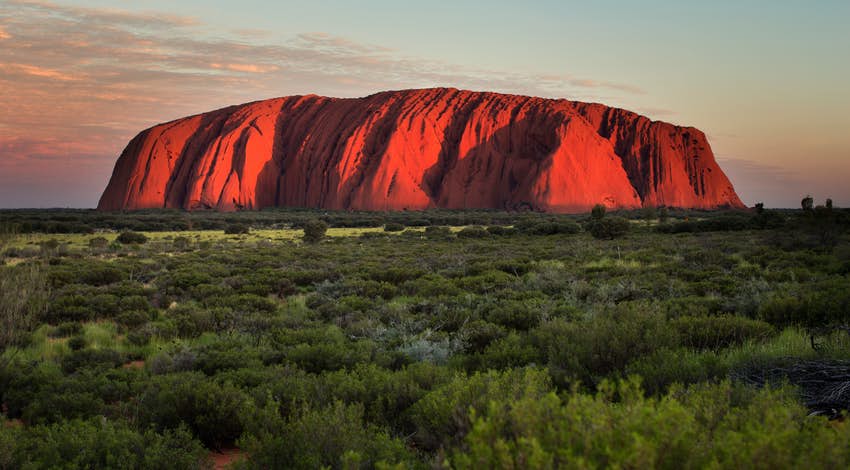 At sunset, when its wavy walls blaze gold, Uluru looks like a ship on fire in a desert sea. Rising to 1142ft (348m), the sandstone monolith seizes your eyes from miles away. It’s easy to see why it’s a sacred site. The Aṉangu people, the area’s original inhabitants, believe it’s still home to spirit ancestors like the python woman Kuniya and the hare-wallaby people, the Mala. But it’s become an icon to all Australians, a symbolic heart beating in the country’s Red Centre. Until 2017, visitors were allowed to summit Uluru, which went against the wishes of the Aṉangu, who worried about degradation and climber injuries. There are dozens of far more rewarding things to do – join a ranger-guided walk past sacred waterholes; spot kangaroos hopping through the spinifex; and learn about the Aṉangu at the cultural center, where there is a fantastic display on tjukurpa, the creation period.

4. Experience life in the slow lane on the Okavango Delta 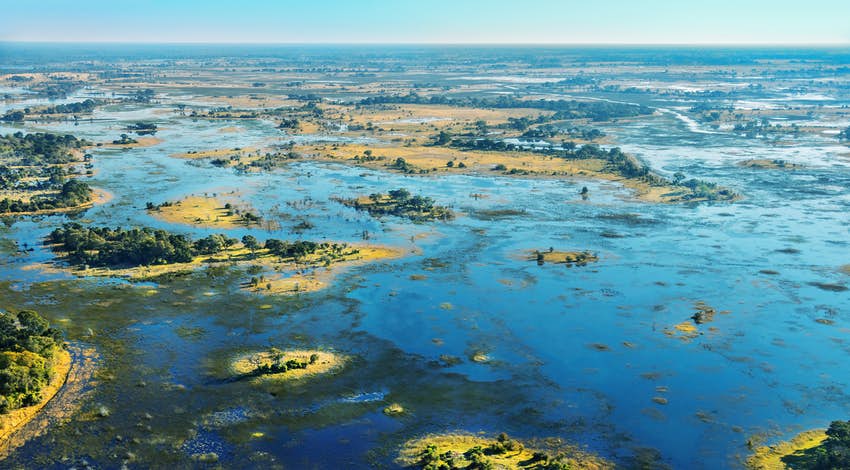 This beautiful wilderness is one of Africa’s most compelling safari destinations. Each year, the floodwaters of the Okavango River arrive from the Angolan highlands and expand this unique ecosystem to almost 7722 sq miles (20,000 sq km), sustaining vast quantities of wildlife. Along with 4WD safaris, visitors can explore by powerboat and traditional mokoro (dugout canoe). As the mokoro is poled silently through the shallow reed-lined channels you are immersed in the environment, hearing every bird and animal call, witnessing the mightiest of elephants crossing your path and the smallest of frogs clinging to the grass. With development and visitor numbers in the delta strictly regulated to protect the environment, the Okavango is one of the most exclusive destinations on the planet. But for adventurous souls who can handle a 4WD and don’t mind camping, there are affordable options within the delta’s Moremi Game Reserve.

5. Sniff out geysers and grizzlies at Yellowstone National Park 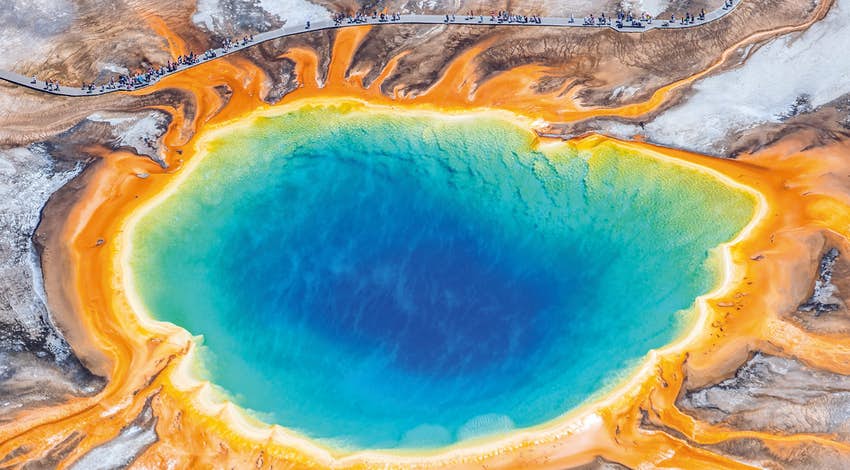 Yellowstone stinks. And it has no manners at all. The rotten-egg whiff taunts your nostrils; your ears are assaulted by a vulgarity of belches, burps and farts. But then, what do you expect when you’re exploring the largest geothermal area in the world? More than 500 active geysers spout in Yellowstone’s enormous, steaming landscape – Old Faithful being the most famous. And there are hot springs to visit – from the bloodshot eyeball of Grand Prismatic to the travertine shelves at Mammoth. The wildlife is perhaps an even bigger draw. This is like North America’s answer to an African safari, although here the Big Five creatures are bison, bighorn sheep, elk, bear and wolf. Watching shaggy bison warming up by a thermal pool, catching sight of a grizzly bear across a meadow, or visiting in winter to glimpse wolf prints in the snow – all are quintessential Yellowstone experiences. 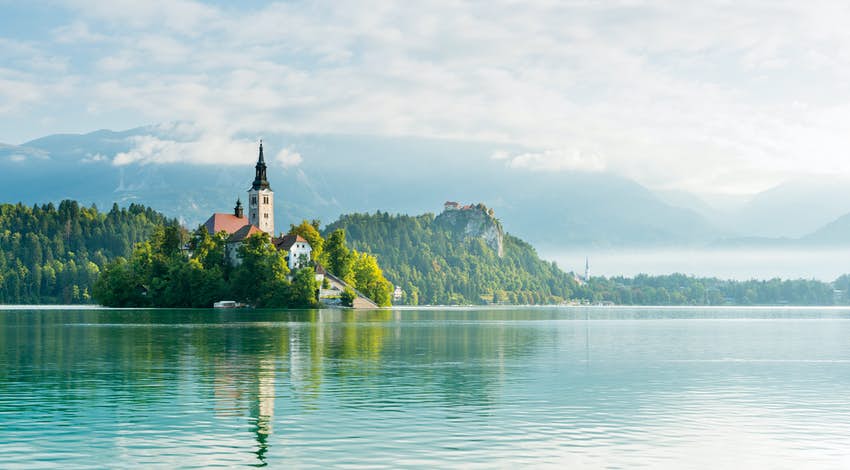 It started with the pilgrims from afar who came to worship at the photogenic island church, it continued with the lakeside sojourns of 19th-century royalty and then of former Yugoslav President Tito who had a villa on the shores – and today, tourism to Slovenia’s Lake Bled shows no signs of slowing. This blue-green body of water with a white church on a green island, abutted by a terracotta-roofed castle and backed by snow-daubed Julian Alps, is Slovenia’s premier crowd-puller. The lake measures just 1.2 by 0.9 miles (2km by 1.4km), so walking or cycling around it is an easy 4 miles (6km). Hire a pletna (gondola), dive beneath the glass-like surface and stay over in one of many beautiful shoreside properties. Slovenia has won praise for eco-initiatives like ecologically designed Garden Village Bled, where a stream snakes through a collection of tree houses and glamping tents.

7. Marvel at the astounding power of Iguazú Falls 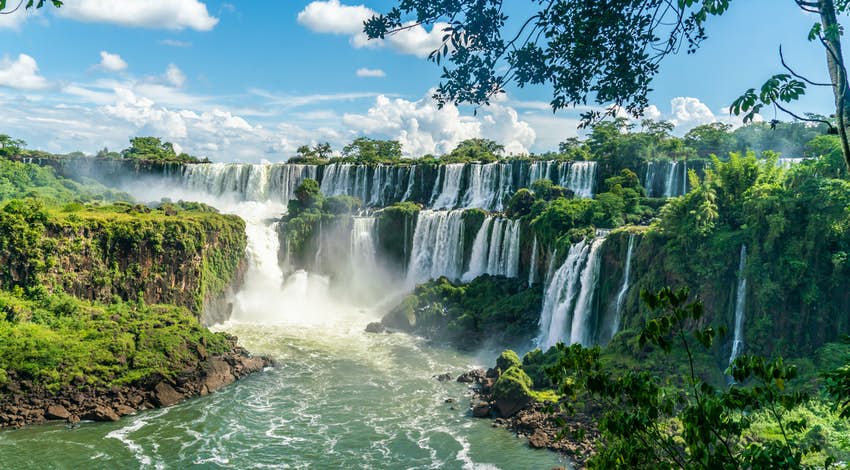 Marking the boundary between Argentina and Brazil, the Río Iguazú flows languidly through the jungle before plunging over a basalt ledge with such sudden, furious force that the planet’s most awe-inspiring waterfalls are the result. On the Argentinian side, a boardwalk leads through jungle vegetation replete with butterflies and squawking parrots, passing a series of increasingly impressive falls until finally the Garganta del Diablo (Devil’s Throat) comes into view. A visit is a jaw-dropping, visceral experience, and the power and noise of the cascades – a chain of hundreds of waterfalls nearly 2 miles (3km) in extension – live forever in the memory. Sunlight shines through the spray, creating multiple rainbows as the falling water ricochets up off the river below. The exhilarating cool mist, the high decibel roar and the thundering vibrations of crashing water remind you in no uncertain terms of the power and splendor of nature.

8. Find Hindu heaven at the temples of Angkor 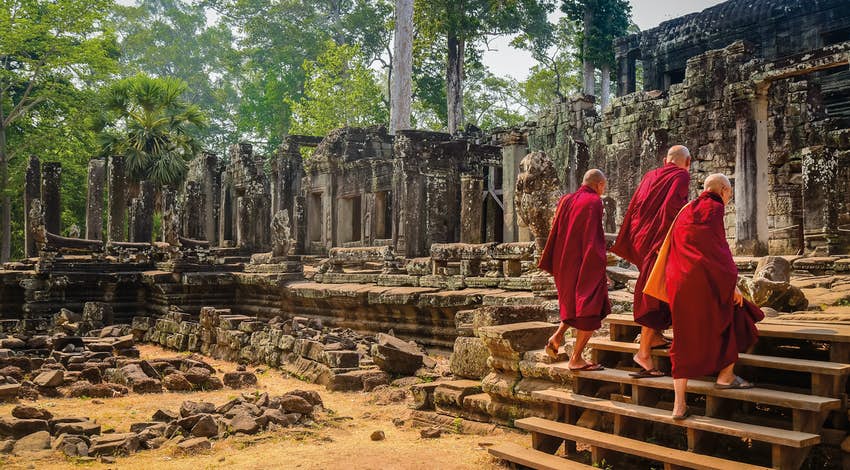 A monument to human ingenuity and devotion, the temples of Angkor have an ability to inspire awe that rivals many of nature’s contributions to this list’s top 10. And so they should – Angkor Wat, the most famous of Angkor’s sites, is a representation of Mt Meru, center of the universe and abode of Hindu gods. Imagine the wonderment of the ancient Khmer as they entered Angkor Wat for the first time: crossing the vast moat, peering up at the 180ft (55m) central tower, gazing at intricately carved bas-reliefs. Beyond Angkor Wat are more than 1000 temples and shrines, including Ta Prohm, its towers gripped by the jungle, and Bayon with its giant stone faces. The temples are the perfect fusion of creative ambition and spiritual devotion, and a point of pilgrimage for all Cambodians. Avoid the crowds with a visit in the wet season for (hopefully) that perfect Angkor sunrise.

9. Strike out on the salt of the earth at Salar de Uyuni 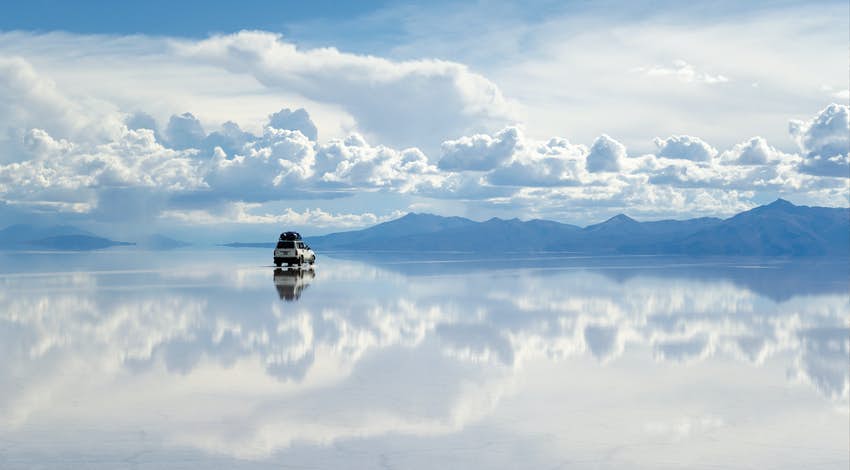 Imagine this: you’re standing in the middle of the sky. Clouds above. Clouds below. Blue all around. That’s what it’s like at Salar de Uyuni, the world’s biggest salt lake, after rain. The thin layer of water turns the utterly flat salt surface into a vast mirror. The horizon disappears and you seem to float. That’s only one of the brain-bending experiences you’ll have visiting these 4085 sq miles (10,582 sq km) of salt, high in the Bolivian altiplano. When the lake’s dry, the white cracked immensity feels like a desolate, sun-scorched post-apocalyptic landscape. In the dry season you can visit the lake’s two islands – Isla Incahuasi and Isla del Pescado – craggy husks of land sprouting with cacti. See too the geyser fields with boiling mud and sulfur steam. Several of the eerie high-altitude lakes, turned aquamarine from high mineral content, are home to flocks of flamingos. 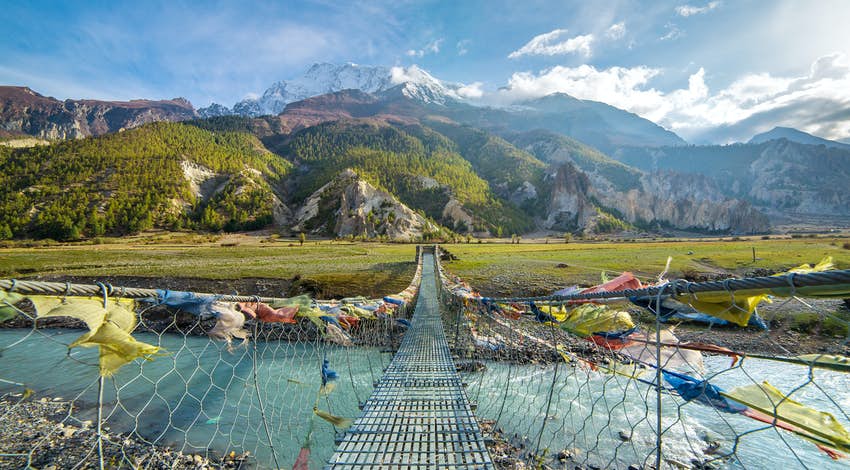 Nepal offers golden temples, charming hill villages, jungle wildlife watching, and the incredible walk around Nepal’s Annapurna massif, which has long been considered one of the world’s great treks. The scenery is mesmerising and the sense of journey is psychologically satisfying, starting in rice paddies and climbing through yak pastures before crossing the mighty snow-bound Thorung La pass. It’s everything a good trek should be – challenging, majestic and inspirational. And at the end of the day some of Nepal’s best lodges offer hot meals, apple pie and pots of milky tea. However, it’s the side trips that make this a truly great trek, notably up to high-altitude Tilicho Lake or to the village of Ngawal, where terraces offer views of snowcapped peaks just across the valley. Build in a couple of extra days, shake off the crowds, and take your time – this is not scenery to rush through.