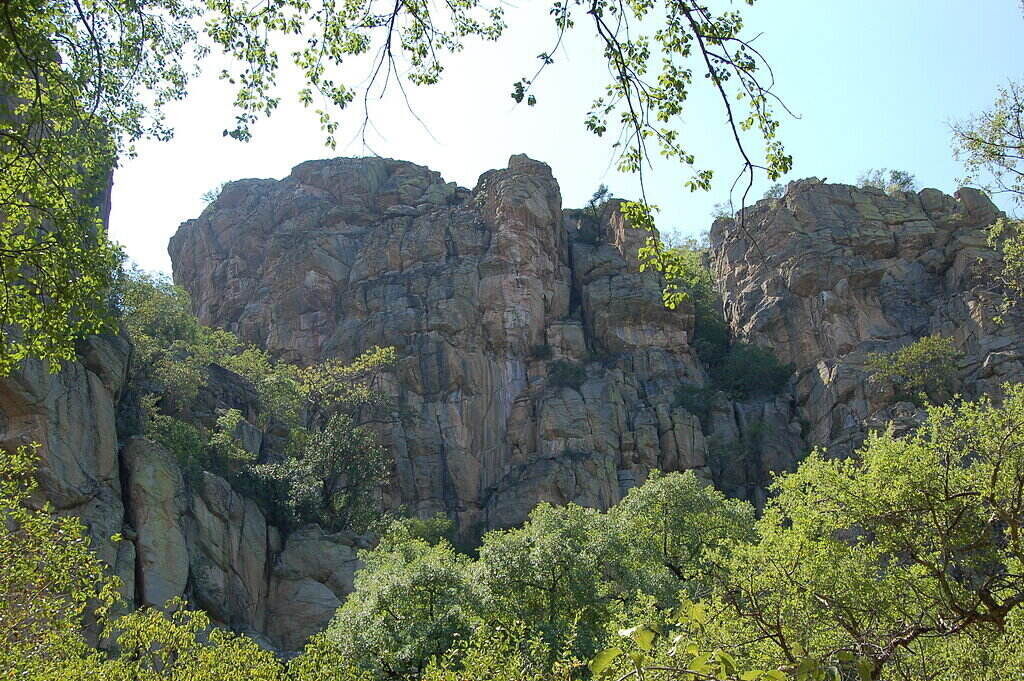 Discover an atmosphere of mystery and intrigue when you take a trip to the Tsodilo hills. Botswana is a land filled with wild beauty and the Tsodilo Hills add just that bit more to the splendour of this already-astounding continent.

Situated in northwest Botswana, approximately 40 km (24.85 miles) southwest of the Okavango River, these hills are the pride and joy of Botswana. The area comprises quartzite rock formations that rise in the east of the Kalahari Desert. In the west, the region takes the form of a dry fossilised lake bed.

The hills stand as a testament to the nation’s cultural and spiritual heritage. We reveal more about the wonders of the Tsodilo Hills below.

Take A Trip Through Time At Tsodilo Hills 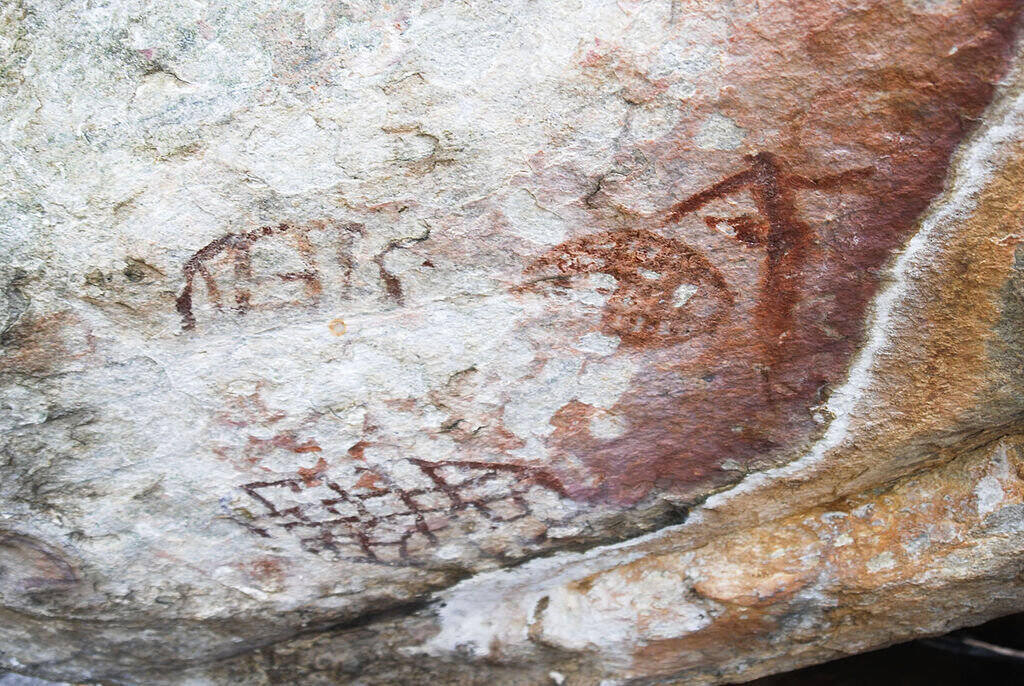 Thousands of years ago, the rocky Tsodilo Hills offered refuge for local tribes across the harsh landscape of the Kalahari Desert. This oasis encouraged human settlement and provided shelter for many.

Over time, ancient Bushmen left rich traces of their presence. Their “footprints” give the hills extraordinary historical significance. It’s a chance for you to explore a lost world.

Archaeological records give an inconsistent chronological account of human activities and environmental changes in the area. These records date as far back as 100 000 years ago. The rock-embedded remains tell a timeless story of the symbiotic nature/human relationship that has spanned over millennia.

Today, the surrounding communities consider Tsodilo a sacred place. The hills are seen as a home for ancestral spirits – a holy land of ancestors. 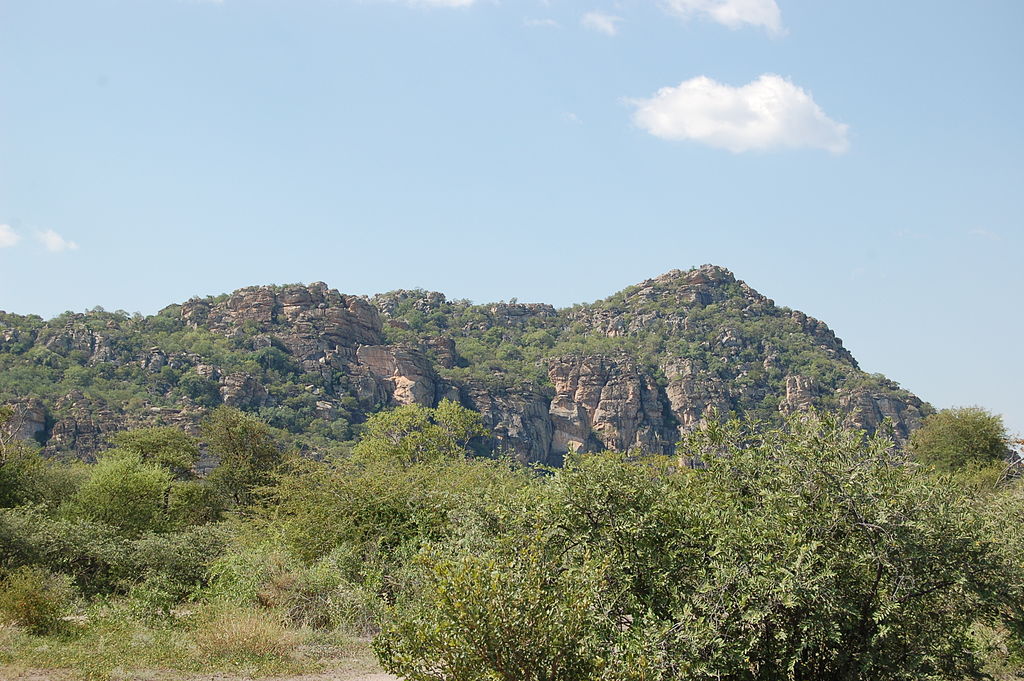 As one of the world’s oldest historical monuments, the Tsodilo Hills are a surprising sight. This UNESCO world heritage site consists of four large masses of rock. They are an unexpected geographical projection in the otherwise dry expanse of the desert.

The three main hills have been named by local communities. The biggest formation is known as the ‘male hill’ and the second smaller form is the ‘female hill’.

The smallest projection is known as the ‘child hill’. Legend has it that the fourth hill, a smaller anonymous kopje, is the male’s first wife whom he left for a younger woman. She now prowls in the background, hungry for revenge…

The pinnacle of the male hill is considered to be one of the highest points in Botswana. San legend believes that the first spirit knelt on this point of the hill after creating the world. Apparently, you can still see the impression of the spirit’s knees in the rock! 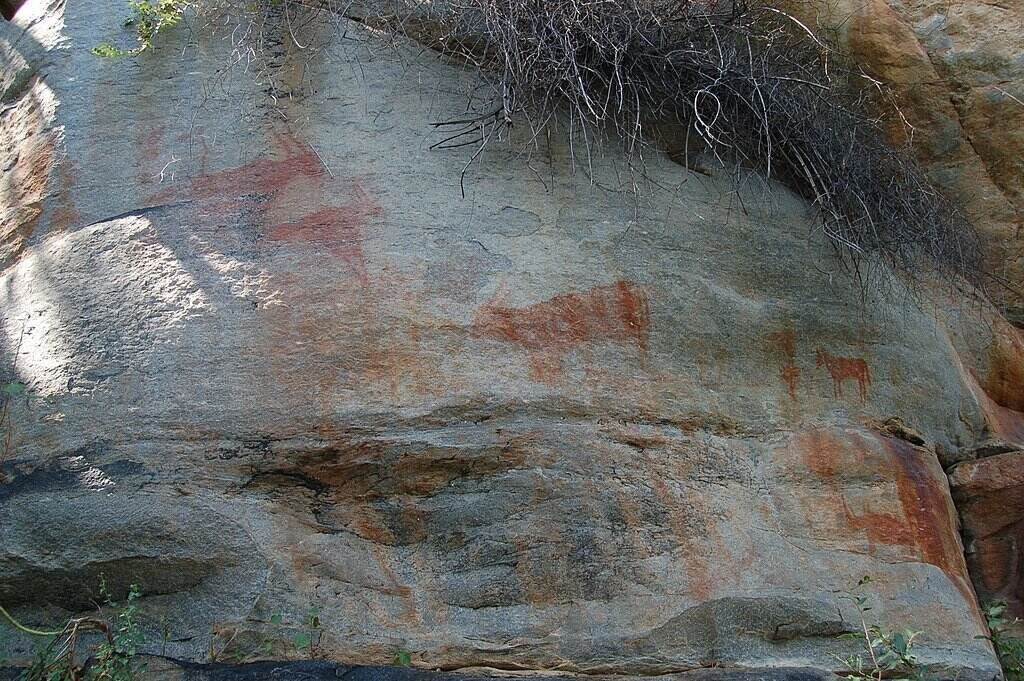 Perhaps the most captivating quality of the stunning Tsodilo Hills is the preserved rock art. The area boasts thousands of these ancient paintings. Some are believed to be over 20 000 years old.

Representing thousands of years of history, the rock paintings can be found by following guided trails that lead to over 350 protected sites. One of the artworks, a painting of a zebra, is now used as the logo for Botswana’s National Museums and Monuments.

The Tsodilo Hills’ paintings depicting a strange mix of wildlife, including herd animals, whales, and penguins. The inclusion of marine life in the art suggests there was contact between the Bushmen and coastal tribes.

You will need at least a couple of days to thoroughly explore the exceptional rock paintings in this region. Especially if you want to make spiritual contact with Botswana’s ancestors. With all the area’s mystique and history, it’s no revelation to see why the area is a UNESCO world heritage site and attractive travel destination. 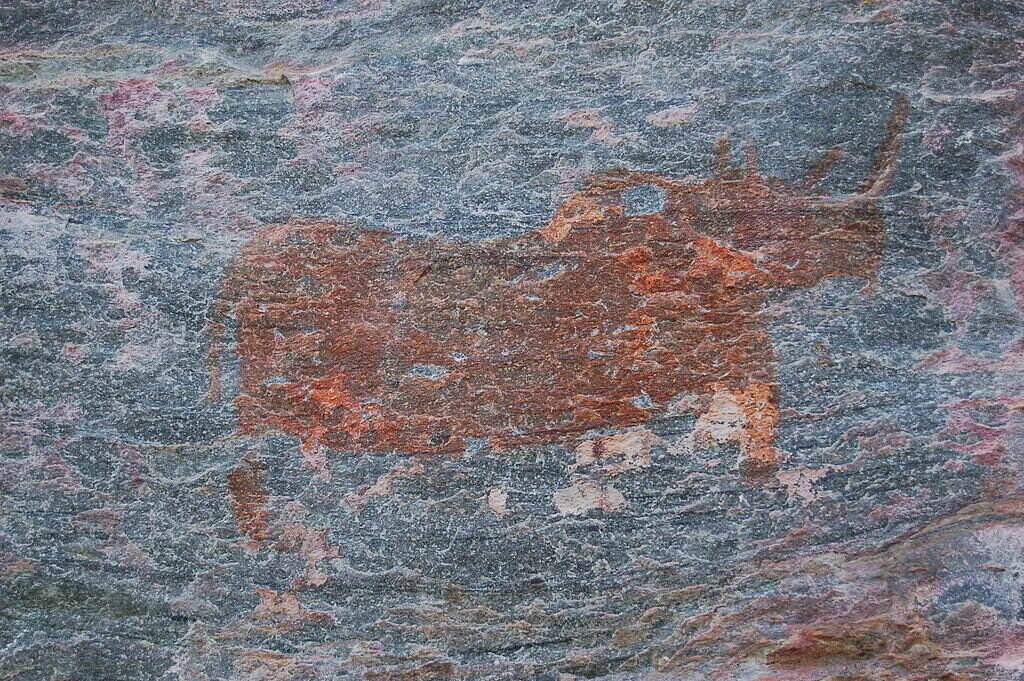 Many lithic materials were discovered in this cave. The materials include charcoal found during excavations. These excavations have been dated back to the African Iron Age, the Middle Stone Age (MSA), and the Later Stone Age (LSA).

Except for the white rhino painting, most of the cave’s art has been painted in red or orange. You can see the depressions and grooves created by rock tools all over the walls. The detailed depictions really give you a sense of the ancient African tribal world.

The white-coloured rock paintings at Tsodilo are attributed to the Bantu peoples. Most of these pale depictions are located in the White Paintings Rock Shelter on the male hill. These artefacts show animals as well as human figures.
The history of Southern Africa truly comes alive at this national monument. Deposits of charcoal, ostrich eggshell, and bone samples were unearthed here. These dated back to the MSA and LSA.

On the northwest side of the female hill, you will find the Depression Rock Shelter Site. This fascinating place gets its name from the depressions naturally engraved into the rock walls. Next to these carvings are several red paintings of curious geometric shapes and cattle.

One of the most interesting finds in the shelter was pottery dating back to the first century. These are among some of the oldest artefacts found in the area.

Then, a rather random fact for our fellow oddballs. Archaeologists detected mongongo nutshells in the deepest layer of the shelter. These egg-shaped, velvety fruits are considered the oldest mongongo nuts ever found in an archaeological context.

More To See At Tsodilo Hills 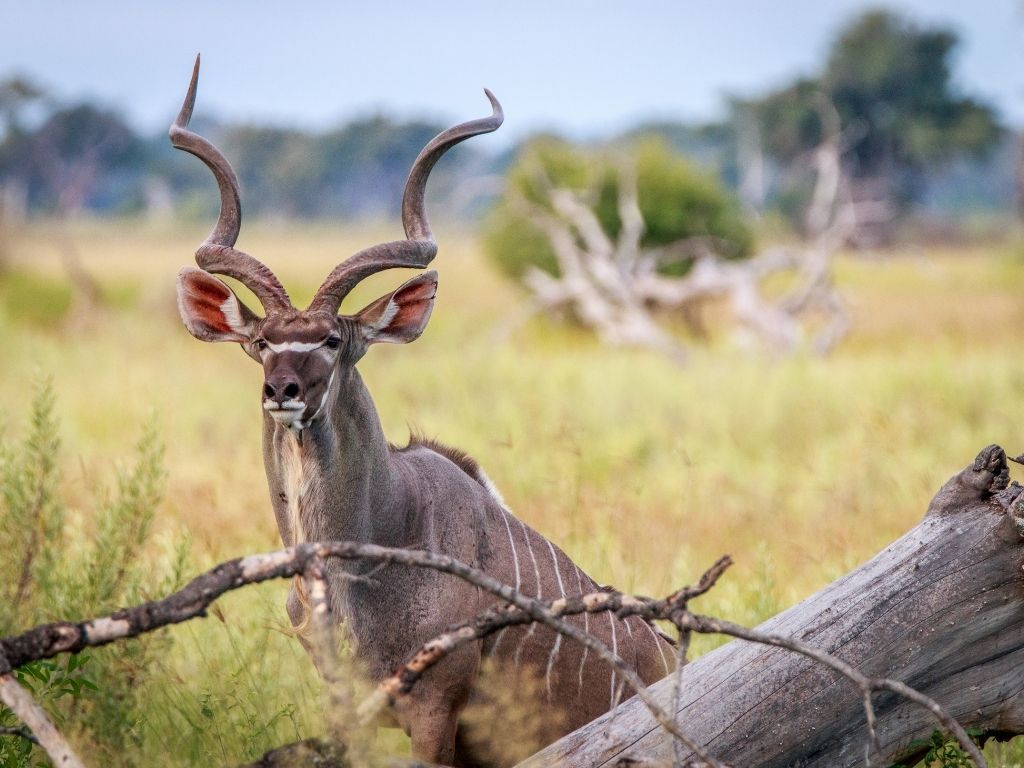 When you think of Africa the first thing that comes to mind is wildlife. Although this Botswana destination is not known for a vast number of animals, it does host some memorable and rare species.

The Tsodilo Gecko is unique to the Tsodilo Hills. It has a striking appearance with yellow and brown streaks. If you decide to visit this incredible place, you’ll get the once-in-a-lifetime chance to take a look at this small nocturnal lizard.

That is if you’re quick enough. This cute little fellow is lightning fast!

Other animals you can see here include Kudu, Steenbok, and Duiker. If you are very lucky, you might be able to spot a leopard. This spotted predator’s tracks can often be seen around the hills.

Avid bird watchers must spend some time in the mixed woodland situated further away from the hills. Yellow-Billed Hornbills, Grey Louries, and Melba are just a few of the commonly-sighted species. 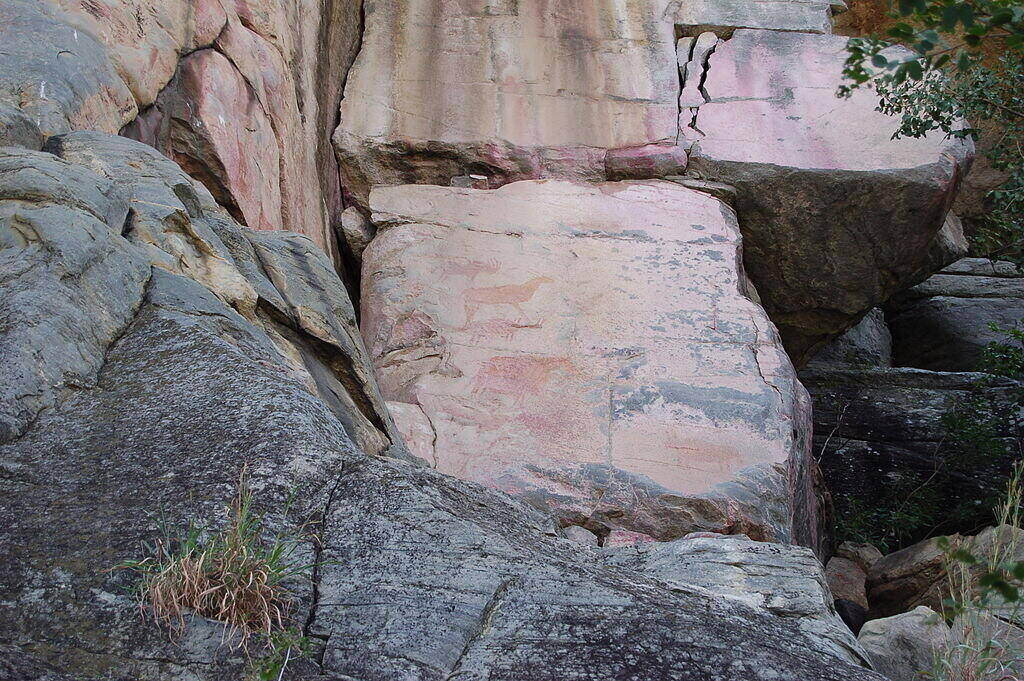 African adventure comes in all shapes and sizes, but it doesn’t get bigger, better, and wilder than captivating Botswana. This landlocked nation is bursting at the seams with history, culture, and authentic African experiences.

At the heart of this bountiful nation are the Tsodilo Hills. An opportunity to see first-hand what Africa has to offer. Don’t miss your chance to explore ancient Africa and this once-upon-a-time oasis.